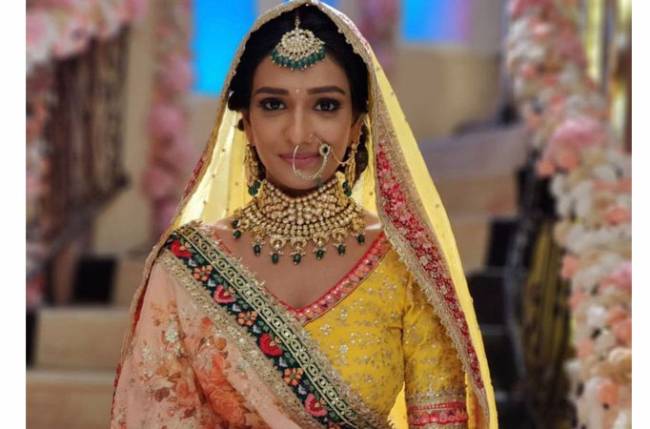 After several extremely successful collaborations such as Hum Paanch, Pavitra Rishta, Jodha Akbar, Kumkum Bhagya, Kundali Bhagya, Zee TV and Balaji Telefilms recently presented viewers with an exciting story about life, love, karma and destiny. Set against the backdrop of Mumbai, Zee TV’s Bhagya Lakshmi follows the journey of Lakshmi, a selfless girl of limited means, who despite her humble background and the curveballs life has thrown at her always puts others’ needs before hers. The show recently took off on a rather successful note and is now set to provide viewers with its first-ever happy moment which is none other than Rohit and Aishwarya’s wedding. The duo has already begun receiving mass appreciation from the viewers for their stunning chemistry and their wedding is set to be the biggest highlight to come in the show.

Setting some bridal goals for all her fans and the Zee TV viewers, the beautiful Aishwarya Khare will be seen donning a bright pink and orange elaborate lehenga, along with an elegantly designed jewellery set that will make the actress look nothing less than a royal bride. In fact, Aishwarya Khare also felt like a bride herself and had a rather surreal experience shooting for her bridal sequence in this show.

Sharing her experience, Aishwarya mentioned, “I was extremely happy seeing my look, so much so that I almost got emotional after getting dressed. I felt like a royal bride onset and was really thrilled by the efforts put in by the entire team to make me look so pretty. Right from the lehenga colour to its design and the extravagant jewellery, it all made my appearance so perfect that I just couldn’t get my eyes off myself. It’s every girl’s dream to be dressed as a beautiful bride and I think a small part of my dream did come true after seeing myself in such a royal avatar. Also, this lehenga was not a usual one like a red or a maroon colour but we went for an orange and pink lehenga and I never thought this combination would look so good as a bridal lehenga. However, I had quite a tough time shooting for this sequence, the lehenga and jewellery together weighed nearly 10 kgs and it did get tiring to shoot continuously in it. Having said that the team was extremely considerate of this, and I had really fun shooting this sequence. I shall remember this experience even when I become a real bride. (smiles)”

Well, we can’t wait to see Aishwarya in her royal avatar now. While her look is sure to leave the viewers startled, there is another visual surprise coming their way. The Kundali Bhagya and Kumkum Bhagya stars will also make a special appearance at Lakshmi’s wedding and will bring all the glitz and glam to this new telly wedding.

To know more, tune into Bhagya Lakshmi, Monday to Saturday, at 8:30 pm only on Zee TV!