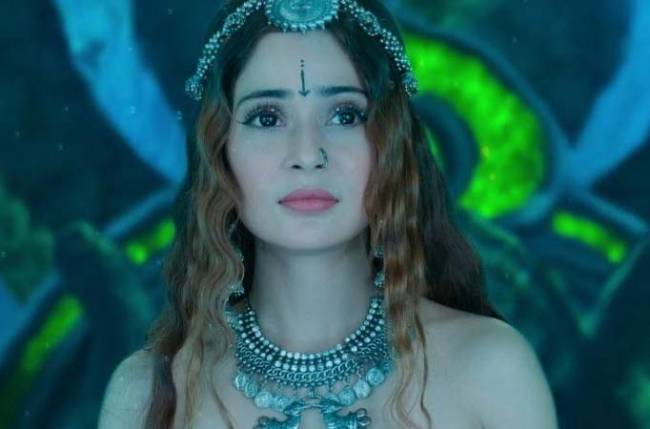 Everyone pays for their sins and so will Devi Paulomi (Sara Khan) in &TV’s Santoshi Maa Sunaye Vrat Kathayein. Notoriously known to create havoc and troubles in Swati’s (Tanvi Dogra) life and even trying to kill her, Devi Poulami now will be reprimanded for her deeds. Justice will soon be served to Swati as Devi Paulomi is banished from swarglok and is exiled to asurlok. In a whole new daunting avatar, she will be recognized as Asur Rani Paulomi, a vengeful and ruthless force who cannot be stopped and will be plotting ways to create new challenges in the lives of Swati, Ushma Devi (Ratan Raajputh), and Santoshi Maa (Gracy Singh).

Giving us details on her new look, Sara Khan shares, “The viewers have seen me embellished in all that’s gold and glitters, it’s time to switch it up a notch higher! I will be seen in an all-black outfit accompanied by oxidized silver jewelry. The intense colors will truly describe Asur Rani Paulomi’s destructive characteristics.” The show has constantly been giving the viewers a thrilling and cliff-hanging experience. With Swati’s memory still gone, Indresh (Ashish Kadian) and his family will have a tough time settling with her. Swati is still unable to comprehend Babli’s looks and is doubtful that Indresh is hiding something from her. Sharing Rani Paulomi’s intentions, Sara Khan says, “In the Dev sabha, Paulomi’s true intentions were revealed and guilty of attempting to kill a human, she was reprimanded by Mahadev and sent to asurlok. Enraged to be cast out of swarglok, Paulomi is hell-bent on proving her strength over Santoshi Maa. Her anger will give rise to a lot of suffering and bring about multiple twists that the audience will never expect!” Will Ushma Devi be the first to face the wrath of Asur Rani? How will Paulomi bring havoc in the lives of Swati and Santoshi Maa?