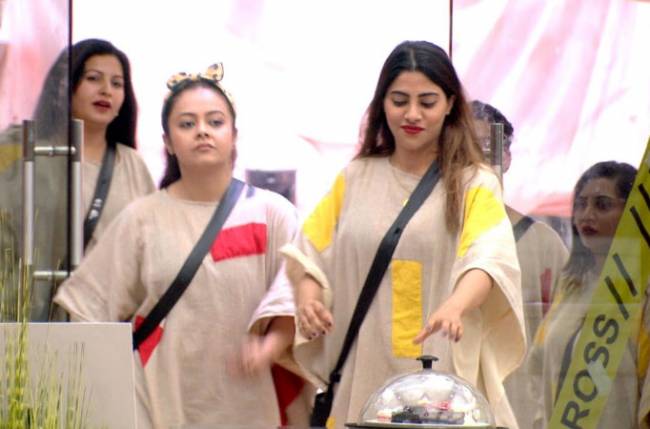 The lockout task in Bigg Boss is still running in full force. The housemates are surviving on basic food items provided by Bigg Boss. To earn luxury items, they have to follow rules and earn points for their respective teams. The two teams – Red team led by Rubina and Yellow team led by Rahul – are doing their best to make sure that they win the task. They try to trick the other members into breaking rules and piling up points because in this task.

Bigg Boss is continuously enticing the housemates by placing food items inside the house. When the desserts are presented to them, every inmate wants to go rush in and grab a bite! While Rubina as the leader tries to maintain order, Nikki dashes in and picks up a pastry. The housemates are livid and Aly is extremely upset that the leaders cannot maintain order. Arshi and Rakhi also get into an altercation over desserts. Aly and Rahul blame Rubina for not stopping Nikki. While the other housemates have not consumed the desserts, Nikki eats hers!

Devoleena is irritated and upset about this and screams at Nikki for putting the entire house’s rations at risk. An unfazed Nikki shouts back at Devoleena and says that she doesn’t care about it. In fact, she acts extremely casual and spends time inside the house while the others are locked outside. Her own teammate Aly is unhappy with her actions. Nikki even teases Devoleena which further infuriates her! Their ongoing feud doesn’t seem to end!

Has Nikki indeed jeopardized the task? How long will Nikki and Devoleena’s feud last?