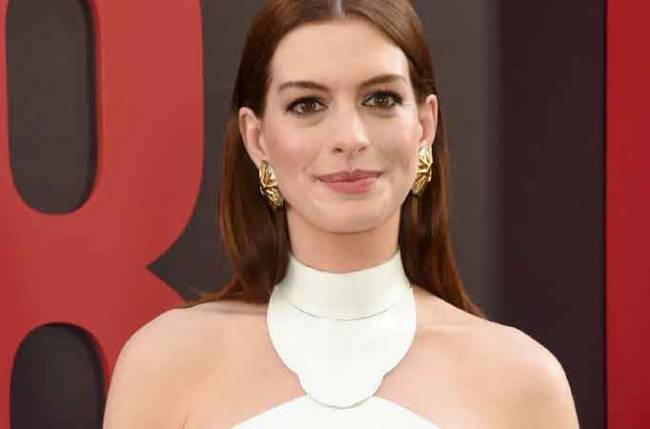 Hollywood star Anne Hathaway says her two sons Jonathan and Jack have a cute relationship. She added that the siblings love to wrestle with each other.

Talking about how Jonathan is “coping” with having a younger brother, Hathaway said: “No coping, just love. Now Jack’s big enough to wrestle with, and that’s brought a new element to their relationship that’s really cute.”

Hathaway shared that she was pregnant with Jack while filming her upcoming film, “The Witches”, adding that she had to deny wearing “tight” clothes on the film’s set, reports femalefirst.co.uk.

“Now I have a beautiful almost-11-month-old boy, but I was pregnant when I made ‘The Witches’, so technically he’s all over that performance,” Hathaway said during an appearance on “Live with Kelly and Ryan”.

She added: “(The costume designer said) ‘I really want you to have a really tight waist’. I had just found out that I was pregnant and I was like, ‘no, I don’t think so’. And she was like, ‘Well, why?’ And I was like, ‘Eh, you know, I just know myself.’ I’m scrambling for a reason.

“I’m like, ‘I just know myself and I know that I won’t be as free. I won’t be as free if I’m constrained around my middle, so we just better make everything very loose’!” she recalled as telling her costume designer.

Hathaway gave birth to Jack in November 2019, but has not shared details on his birth. She was also not comfortable to talk about her family life when she was pregnant.

The actress said that she and her husband Adam Shulman had come up with a “cruel” trick to play on those who asked if they’ve decided the baby’s name.

She said: “It’s really cruel, but I enjoy it so much. Everyone’s so sincere about it and happy for you and being nice to you and all those things, so I like to twist that. (Adam and I) try to come up with names that are beautiful-sounding but will make other people intensely uncomfortable.”