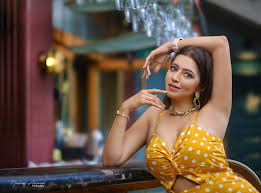 Ridhiema Tiwari is one helluva actress.

She has been seen in shows such as Divya Drishti and Santoshi Maa Sunaye Vrat Kathayein.

She has also done a Bollywood film Begum Jaan with Vidya Balan in 2017. The actress was happy with her role in the film but later she continued doing television due to lack of quality roles in films.

Ridhiema said that Begum Jaan was a good break in Bollywood and it got her the ‘tag of a talented actor’. It also changed perception of many people who have reservations when it comes to casting TV actors in films. However, when there are a few TV actors like Shah Rukh Khan or Sushant Singh Rajput who have made a successful transition.

During the pandemic, Ridhiema has done shows like Santoshi Maa Vrat Kathayein and Ranju Ki Betiyaan. Now, the actress is all set to reprise her role in the second season of Sasural Genda Phool. She says, “I will be reliving the character of Disha. When I did the first season, the show became a turning point in my career and it gave me immense satisfaction as an artist. I am looking forward to the second season now.”